I've got some mixed feelings about this one. I really wanted to love it but just didn't like Power Girl here. She comes across as very shallow and self absorbed. Not a the way I had thought of ber being before. Huntress is very likeable and I liked seeing her as the Robin of Earth 2 but really not a lot goes on in this volume. I still want to get the next volume and read it but it's not a high priority at this point.
Tweet This is pretty much a free reference guide to the DCU, lists reading orders for some of the best and better known storylines and Graphic Novels. An excellent reference for old and new fans.
Tweet 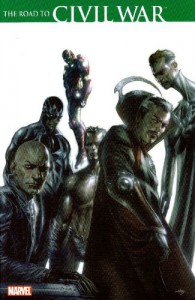 Well, I had never had the opportunity before now to read all of the Civil War storyline, so all of the issues in this were new to me. It collects: New Avengers: Illuminati; Amazing Spider-Man (vol. 1) #529-531, and Fantastic Four #536-537. The stories are interesting but even though I kind of know how this story goes I find some of it a bit puzzling. As a collection it doesn't hold up that great, because the issues aren't directly related to each other. I guess at some point down the line it will be obvious why those Fantastic Four issues with Thor's hammer were included but right now it doesn't make a whole lot of sense.
Tweet I finally got around to reading this. It's really good. I've never read any of the original series but this was a pretty solid origin story. It has nice art and flows seamlessly from beginning to end.
Tweet Well, I finished the first volume of Ms. Marvel, and it's firmly in the ok-ish department. I would give it 2 1/2 if we had a half star system; so I just rounded up.

The main character is likable enough but there's a lot I don't like. I find that the story feels both shallow and contrived. She hands down has the vaguest origin story I've ever read. Her power set is sort of gross. I don't like looking at her deformed hands and legs. Stretching powers in general gross me out at little bit. I also think her costume is pretty frumpy. Don't get me wrong I'm all for a modest costume but I just don't like this one. In the end the story is firmly ongoing and little really happens throughout the book.
Tweet I'm not really well read on Doctor Strange stories but so far this one is my favorite. It's a modernised retelling of his origin story. Well written and with beautiful art.
Tweet This is a good, but not great story featuring Doctor Strange and Night Nurse trying to save Wong who has a brain tumor. This most disappointing thing about the book is some very dated looking art and character designs. Something about it just looks off to me, I guess it's the style paired with more modern coloring techniques, that just doesn't seem to look right together. It would have been so much better if they would have updated his look a little.
Tweet Nice telling of the Doctor Strange origin. I liked the art but it probably would have been better for me with just a tad more color variation. Some of the images were sort of hard to make out without just staring at it and staring at it because the colors were so close together. Like those images they use to test for color blindness.
Tweet

I LOVED All-New Invaders Volume 1. If fact I'm probably going to go ahead and start volume 2 before I try anything else. A lot of times it's harder to put your finger on; and say something about what you like; but you know it when you can't wait to turn the next page and see what happens next. Oh, and I really love the lineup of characters here.
Tweet I'm going to have to say one star on this one, I thought it was boring. The dialog is full of stilted "street talk" and it quickly annoys. Story wise it's about as generic as it gets. I don't care for this Ghost Riders character design, it looks like fan art of Ichigo from the Bleach Manga in his Hollow form. Really feel like this one will only entertain little kids.
Tweet I read this back in 1998 when it was originally published and had pretty much put it out of my head in the meantime. Now that I've reread it I remembered why I forgot it in the first place. This is the Kevin Smith run on daredevil, and it does have some decently written parts... And then there is the rest of it. It just the way it's written is very... smug? That might be the best word for it. Pop culture references abound and it has a ton of easter egg references to fanboyish things in it. There's even a parody of that scene from Batman the Animated series where all the villains are sitting around talking about how they almost got'em. But the worst part is when the villain is revealed and there is this endless narrative of him explaining how very clever he is... Sigh.

Oh, and the goodreads synopsis is wrong. It should be this one [Taken from Amazon listing]:

Collects Daredevil (1998) #1-8. A scared teenager on the run. An infant child some say is humanity's savior. A former lover whose life is now hobbled by a terrible secret. A law partner accused of a horrible crime. A city being overcome by an inscrutable menace. They need a guardian. Someone to protect them. Someone with faith in them. They need Daredevil.
Tweet It took me a ridiculous amount of time to finish reading this story. I just couldn't seem to get into it at all. Maybe it's because I don't know anything about the previous storylines, or I just don't care about Thor enough for it to matter to me? There's nothing really objectionable in it, I just wasn't that into it.
Tweet I wasn't crazy about the first book in this series but there was something there that made me keep with it and I'm glad I did. This series has just gotten better and more interesting as it went along. There's something very dreamy about it, that makes me think about rainy summer days I used to spend reading in a window alcove at the local library... I wish the last book was already out so I could finish the story. I just hope the author can keep up this momentum and give us an amazing ending. Probably won't end up being my favorite, but it's interesting enough and the art style is unique.
Tweet Wow! I really enjoyed this one. It's a really action packed story with a lot of twists and turns. It has a smattering of romance but thankfully it isn't the primary focus.
Tweet It had been several years since I last read this book, and it was wonderful listening to it in audiobook format. Laura Kinsale is absolutely one of my favorite writers of historical romance.
Tweet

The Aeronaut's Windlass by Jim Butcher